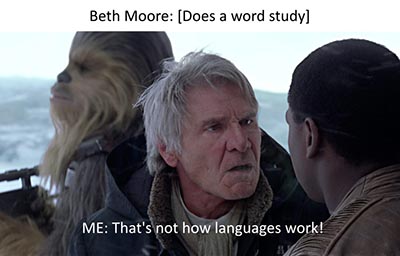 I recently listened to a Beth Moore teaching from her Entrusted series. Don’t ask why, just take the warnings I am giving you and be glad you are not. Most of my critique below comes from a single session of the series.

The Need for Sound Doctrine

The first point deals with her obvious sensitivity to criticism. As she has been attacked for her statements in the past, she dedicated a portion of the video to how it is wrong to divide over doctrine. This is a blanket statement with no qualifications. Division over such is not always bad, but I know too many people who poo-poo the need for good doctrine and theology. The need for good theology relates to the need for good philosophers. CS Lewis put it this way, in Learning in War Time, “Good philosophy must exist, if for no other reason, because bad philosophy needs to be answered.” Likewise, sound teachers must exist so that unsound teachings can be answered.

Paul refers to doctrine several times in his letters (Eph 4:14, 1 Timothy 4:6, 6:1, 6:3; 2 Timothy 4:3; Titus 1:9, 2:1, 7, and 10), warning the readers to reject bad doctrine and embrace good doctrine. If, as Beth Moore says, we shouldn’t divide over doctrine, then she is rejecting the warnings of Scripture. She is also saying that Paul was wrong when he “opposed Cephas to his face, because he stood condemned” (Gal 2:11). Likewise, she is saying the Apostles were wrong in calling the Council of Jerusalem to settle the doctrinal question of how much are gentiles bound to the Torah (Acts 15).

Naturally, not all doctrine is on the same level. Some divisions of doctrine are minor and should not cause a rift of fellowship. Others are major and would prevent two people from worshiping together. Think of doctrine as having tiers. First-tier doctrines (also called primary) are those which you may question if the other person is even a Christian. For example, belief in the bodily resurrection of Jesus Christ from the dead is a first tier issue. One who denies the resurrection of Jesus is not a Christian.

Second- and third-tier doctrines would be like arguing over modes of baptism; pre-mill, post-mill, amill eschatology; speaking in tongues, etc. Those differences of like-minded people form congregations and denominations. They still recognize one another as Christians, but the ministry they can do together is limited. For example, I can easily be involved in a homeless shelter ministry run by a Weslyan (we differ on modes of baptism), but he and I could not plant a church together (because we could not agree on how to baptize). On the other hand, eschatology would be even lower than second-tier because denominations can operate with their ministers holding differing views within the denomination. Differing opinions on second or third tier doctrines are not sin.

In my experience, those who pontificate on how divisive doctrine can be are wolves in sheep’s clothing. They have unsound doctrine and know it! Instead of rectifying their own doctrine, they turn the issue around. However, Jesus said that He came as a sword—to divide—not to bring peace (Matthew 10:34).

In her teaching, Beth Moore made two egregious errors in word studies. While supporting her point with the book of Acts (Sorry, didn’t write it down, but it was either Acts 14:22; 15:32, 41; or 18:23), she mentioned one of the Greek words for strengthen, episterizo. She then said that if you cover the first three letters, the word remaining looks like “steroid” and is where we get the word. I groaned. I knew she was going to go beyond the bounds of sound study. For her to say, as she did, that Scripture is teaching us to “be one anothers’ steroid” is a hermeneutical horror or as D.A. Carson more diplomatically calls the category of error, “an exegetical fallacy.”

Most importantly, words have meaning. Just as importantly, a word’s meaning is tightly bound to the time it is said. Since the concept of steroid did not exist in the first century, no one reading Acts then would understand it to mean “be one another’s steroid.” They would understand episterizo as “support, make firm, confirm,” Therefore, no preacher, teacher, or “Christian communicator” should state it as “be one another’s steroid.” (Similarly, those who make the link that God’s power is dynamos, the word from which we get dynamite, and is therefore explosive, should be flogged.)

Her second error was worse in both the amount of time spent on it and the depth of the error. She was moving around in Scripture again, and I missed the reference she used for ‘uperetes (you may also see this written in English as huperetes). However, the word is used 21 times in the New Testament, so we have an excellent sample to work from. She claimed, correctly, that the word is a compound word coming from ‘uper (under) and etes (rower). All well and good to point out the roots of the word. But stop right there. Instead she spends a significant portion of the video making analogies to ministers being under-rowers, the guys on the bottom deck of the oared ship who can’t even see where they are headed but must rely on the leader above to call/give directions.

When the word was first penned, that is exactly what it meant. The first known uses of the word are from Aeschylus (525-456 BC) and Herodutus (484-425 BC). Then it meant under-rower, but as all students of Scripture know, words shift in meaning over time. By the time of the New Testament, it had come to mean servant, attendant, or minister. The original connotation was no longer part of the meaning. This phenomenon is called “semantic change” and is part of lingual drift.

Beth Moore has spoken about how when she was first called to ministry as a “Christian communicator,” she was unsure of herself in public speaking settings. So she joined a group that taught people how to speak in public. Good for her to recognize her weakness and strengthen it! She also recommended a book she has on how to pronounce Biblical names. Did it never occur to her (or God) that she needs language training if she is going to do word studies? Avoiding this mistake is foundational to word studies. In my own training for ministry, avoiding the root fallacy was one of the first things the hermeneutics professor taught on.

Some have tried to defend Beth Moore as “untrained,” so we shouldn’t expect her to get everything right. However, Beth Moore has been in this very public ministry since the mid 90s, and longer still at the local church level. If she were in her first few years, I would understand the error and pray she listen to those criticizing her. It’s an easy one to make when you first get started.

But, really, you don’t even need to read about Greek word studies to know vocabulary shift happens. Anyone who has said, “The KJV is hard to read” or mentions choosing a modern translation knows that words change in meaning over time.

An example from the KJV to our day is “replenish” such as God telling Adam and Eve to “replenish the earth” in Genesis 1:28. When we read the word, we immediately process that the prefix re- means “do it again.” Therefore, this word must mean “fill the earth again.” No! In the KJV’s time, the re- prefix meant “completely” or “fully.” Words like “research” still show this drift. Researchers aren’t searching again, they are completely searching the topic at hand. Another example is “suffer the little children to come to me.” Jesus didn’t mean “torture the little children.” In modern vernacular, He meant, “Allow the little children to come to me.”

That’s our native tongue, and those words have changed greatly in a little more than 400 years. Any decent word study book will mention differences in meaning by era of use. In fact, every Greek lexicon and word study book I have mentioned the lingual drift if it mentioned under-rower as the root meaning of huperetes at all.

Here’s an example from Thayer’s Lexicon:

These mistakes do not make Beth Moore a bad person. They show she is a faulty exegete. If she were a new speaker, it would mean she is untrained. That she has been teaching so long and remains untrained, means she does not want to learn the fundamentals of her vocation.

James 3:1 gives a very stern warning to those who wish to be teachers. God holds teachers to a higher standard and will give strict judgment to those who teach poorly. Even if you call yourself a Christian communicator instead of a teacher, if you are teaching the Bible, you are presenting yourself as a teacher. Ma’am, if the Scripture calls it a sin, you are not going beyond Scripture to call it sin.

Some may say this is majoring in the minors, that her making these small errors (the word study, not the weakening stance on homosexuality) does not reduce her ministry. However, Jesus said in Luke 16:10, “He who is faithful in a very little thing is faithful also in much; and he who is unrighteous in a very little thing is unrighteous also in much.”

If she can’t be faithful to the call of ministry to learn the fundamentals of Bible study, then how can anything greater she says be trusted?