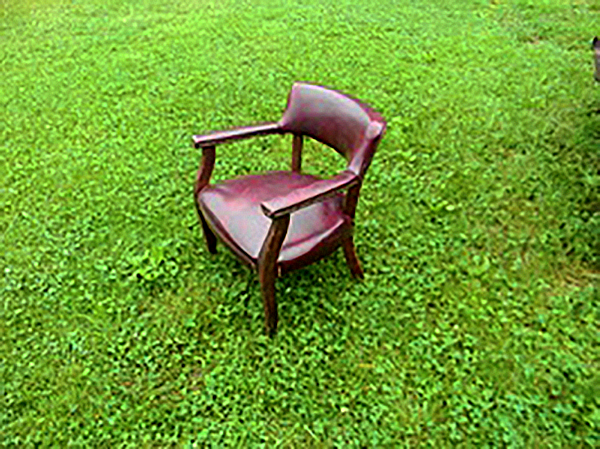 That old chair didn’t fit the decorating or my shop space any more, and needed to go.  It was good but a little worn, so it went out front on a warm day with a small sign: “$20 OBO”.  No one gave it a second glance.  After noon, an older gentleman hobbled by, using his cane to keep balanced.  He gave the chair a long look through his glasses, as if struck by a sudden thought.  He shuffled over and carefully sat down in relief.  His left hand stroked familiarly down the arm, and his eyes lit up as he found the rough part of the finish.  It looked like his sweater sagged just right on the wooden arms. Curious, I strolled out and knelt down next to him.  “Fine day, isn’t it?”  He agreed, noting it was just a bit cool, but felt good to be out in fresh air.  I was about to ask if I could take this home for him, but waited as an another old memory crossed his face.  We stayed there quietly for another few moments, as he was obviously sorting his words with care.

“If I may ask,” he began in a quiet but husky voice, “you’ve had this chair since you were little, but can’t find a home for it now?  It appeared one day without fanfare, perhaps …your father’s garage, but it made a wonderful toy fort?”  How did he know that?  I nodded, unsure of what to say next.  He got a small, sad smile and a gleam in his eye, then continued “Yes … that rough patch was perfect for holding the blanket on Old Fort Smudge.  You’re not the first youngster.  It’s just the right size.  I imagine that your boys or nephews had great fun with it.”  Now I looked in consternation, as if he’d read my mind – Castle Gorgol and my space knights!  “Uhh, is there something more I should know about it, sir?  Where’d it come from?”

He looked off to the center of town and back over decades.  “My grandfather was the town apothecary, once on a time. Father didn’t follow him, but went into the law.  Once I was seven, Mother would let me go all the way to the town square on my own, if I promised to visit Grandfather.  He had three of these chairs, but there was a space for one more; he never spoke of how that went missing.  Customers would come in for a prescription or a special compounding, or perhaps just a soda, and pass some time talking with their neighbors in those very chairs; it was much like the unofficial town council.  One was often alone on its own, so I would bring a blanket with toy soldiers and make a fort there.  Grandfather used some wood spirits and a spatula to roughen the finish a bit on the underside, so my blanket would hold better.  You should have heard the ladies chatter and laugh over it!  And the stories they told …  Later, my father would walk over and then bring me home with Grandfather, for family supper.  Or Grandfather would have what you’d call a late tea with me, and listen with all gravity to my made-up stories about the castle, or Fort Smudge.”

“Father … when I was fourteen, he had to tell me that Grandfather died in a traffic accident.  He was attorney and also the executor, but we had no one in the family who would take over the drugstore, as they called it then.  He sold the stock and property to a cousin, who kept it going another twenty years, but it was never quite the same.  Father kept those chairs as a memento, and had two in his office.  The third?  That vanished at some point, when the now drug store changed hands.”

“Oh, wow.  My dad bought the chair from an estate sale when I was little, and I always liked it.  Now it doesn’t seem to fit right, anywhere.”  Maybe there’s a reason for it.  “Sir, I’ll be glad to carry this home for you.”   He shook his slightly shaggy head a bit, and sighed.  “My granddaughter doesn’t like the style, either, and it doesn’t quite seem to fit … rather like me, some days,” he added after a moment.  He stood up out of the chair, barely using the cane now, as if years were shed, and brushed down his slightly tattered sweater.  “I’ll make you an offer, though.  Five dollars for the chair,”  he raised a finger, “with the stipulation that you leave a space for it on your verandah, yonder, so I may stop as your guest.  This is about as far as I can walk without a rest, and I have a feeling that you’d appreciate some stories about an old chair, and about this old town.  Both of them,” he chuckled warmly, “don’t seem to fit, but at the same time, they’re just right.  Do we have a bargain, sir?”

I put out my hand to shake his, firmly.  “Done.  And I’ll provide the lemonade.”

6 thoughts on “Sitting In”