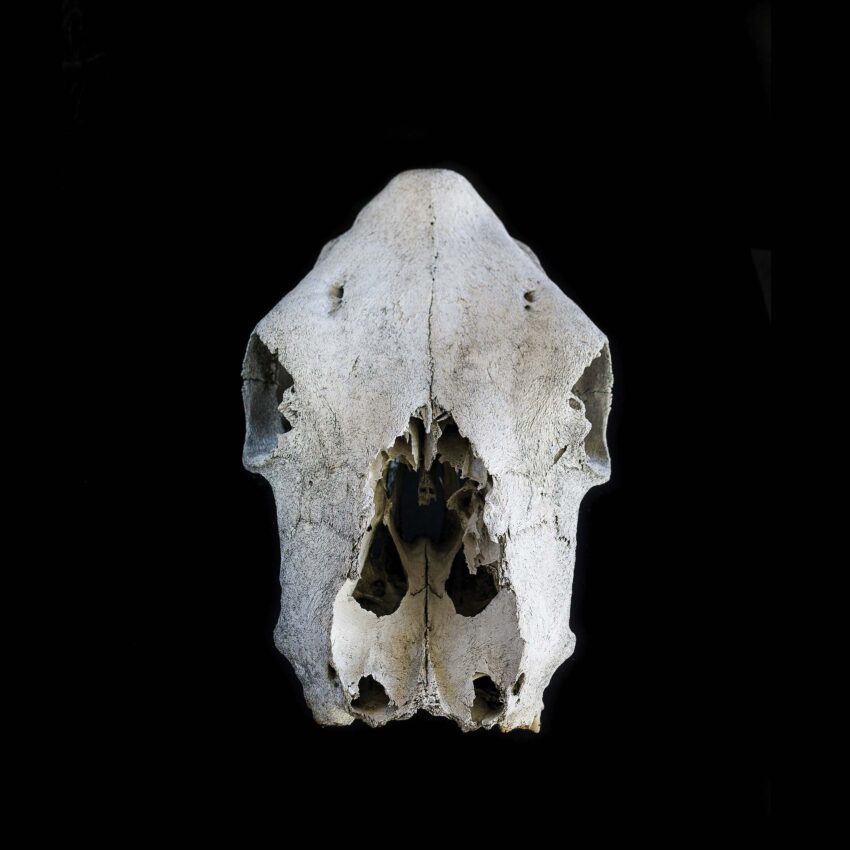 Her body lay at the very edge of the shallow ravine that cleaves the western pasture, tail pointing south, head facing north. A strong wind ruffled the thick, soft fur that covered her bony hips. There were deep half circles cut into the ground underneath her hooves, evidence of her struggle to stand. Three vultures hastily rose up from their perch on her body, their take-off not yet weighed down by heavy bellies. They flew away, but not too far away. The birds, dressed in priestly black, glided in a wide circle in the empty blue of the sky, featherless heads swiveling, waiting for the interloper to move off so they could return to their feast.

Late afternoon of the day before, he had found her, still alive. She scissored her legs weakly as he approached, but she was unable even to lift her head. Her eyes rolled back, a crescent of white flashing in the bright afternoon light. When he touched her head though, she calmed, her legs going still. Number 43 was beyond saving. She had slowly wasted away. For months she had kept to herself, away from the rest of the herd. She grazed alone and in vain, her body shrinking and weakening with each passing week. He had fed her flakes of hay, ferried water to her, but in the end, his efforts couldn’t reverse the inevitable. Her body could no longer process what little she ingested. It went with Number 43 the same as all of the earlier “downers”: Number 29, Number 57, Number 18. There is no rising again once they collapse.

As he walked back to the house, his mind worked over possible scenarios to save her, but one by one, they were discarded as unrealistic. By the time he reached the door, he had made his decision. Imagining 43 being eaten alive after night fell was too much. He knew he’d lay awake listening for the ecstatic yips and cries of the coyotes as they moved in on her helpless body. He thought of her eyes rolling and her legs sawing back and forth in the dirt.

He slung his rifle and headed back up the hill to where Number 43 lay. The light was fading fast. As he neared her, he spoke softly, telling her it would be alright, that she would be safe soon. He knelt next to her, stroking her forehead. He wavered. Her brown eyes seemed to search his, pleading for mercy. He felt his throat constrict; he shut his eyes and forced himself to back away from her, to break eye contact. He stood for some time, facing the western sky, feeling the wind wash over him and watching the colors drain from the thin skein of clouds that covered the setting sun. He lifted the rifle, tucked it into his shoulder, bent his head and looked through the sight. He shot two rounds into the place where he’d been stroking her moments before.

As he walked away, he let the tears come. He’d grown fond of her and she had come to trust him. He knew he’d done the right thing, still, it felt like a betrayal.

The next morning, he drove the tractor up to the carcass and dragged it to a flat, open spot in the meadow, far from where he would come across it again any time soon. Pausing a moment to say one last prayer for her, he removed the knife from his belt and sliced through the thick hide of Number 43’s belly. The opening would make access easier for the hungry. Let the vultures, coyotes, crows, opossums, flies, bugs, and worms have their way with her. It was proper, a law of nature. Her thin body would nourish many, but he had no desire to witness her transformation from flesh to bone.