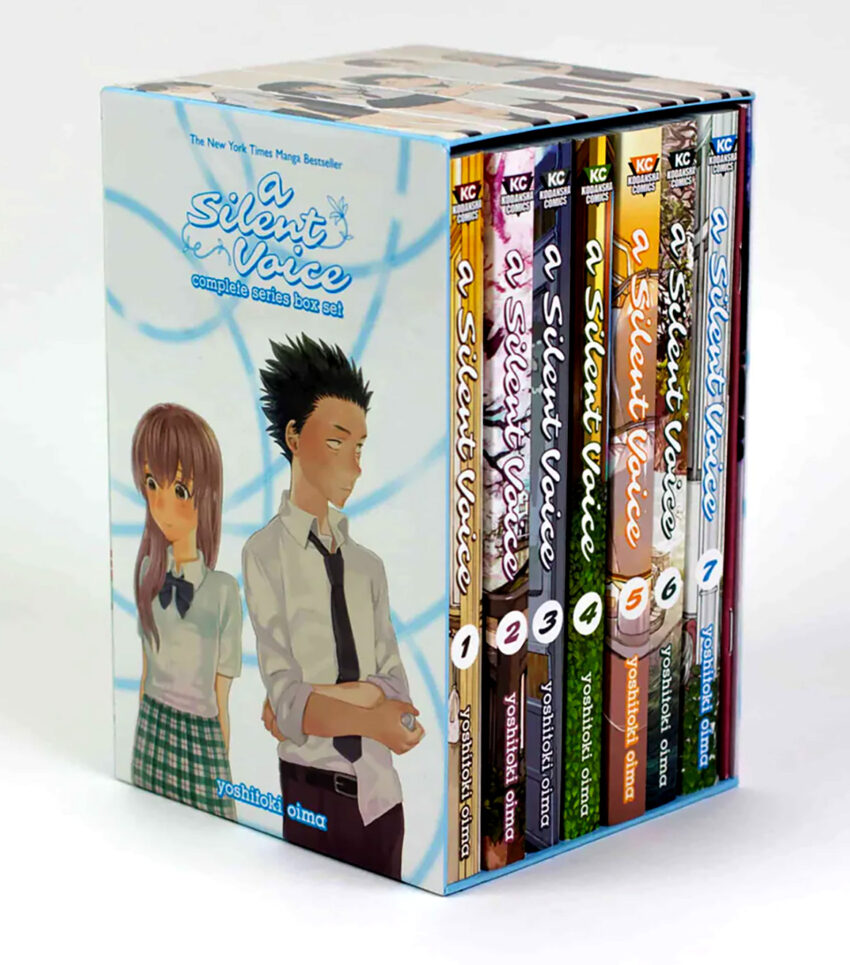 A Silent Voice is a seven volume manga written by Yoshitoki Oima as her first ‘big girl’ work, which gives us Shoyo, a young man looking for some type of redemption after he brutally bullied Shoko, a deaf girl, while they were in elementary school. The story is in two parts; their time in elementary school, and later on in high-school. The first part builds up the setting and emotional terrain, while the second part shows us the fallout of Shoyo’s actions and his attempts to fix what he broke, not just in his own life, but in Shoko’s as well. While I wish I could label this as spoiler free, or low spoilers, I can’t, because there simply isn’t much to spoil.

I am not particularly good at literary analysis, but I believe that at least part of what Yoshitoki was going for was some sort of exploration of what it means to redeem oneself, how to change the future to make up for events in the past. A big portion of Shoyo’s actions within the story revolve around him wanting to ‘fix’ things for Shoko, to give her a normal high school life. He’s not very good at it. There might even be a meta-message within the work itself that sometimes things turn out unsatisfactorily regardless of how hard one wants something or how hard they try. The last third or so of A Silent Voice was quite unsatisfactory, and that may have been done on purpose. There is a rather abortive feeling to the last few volumes that does not match the emotional crescendo the first part of the story seemed to be building towards.

The world of fiction is quite large. It is developed and mature, and authors of fiction have spent literal millennia carving well-worn pathways for stories to take. It requires skill, creativity, and originality to write a story that forges a new path. When done well, it lays a path for later authors to take. When done poorly, it highlights gaps in the author’s skill that would otherwise be ignored by a readership who is getting what they want. Yoshitoki had a choice in which direction to take her story, and she did not go in the direction I expected. My experience as a reader suffered for it.

The following includes spoilers for A Silent Voice:

Based on ad copy and what I had heard about the movie, I was expecting a more mature type of romantic story where the spark for their future relationship was Shoyo taking advantage of Shoko as a vulnerable deaf girl. He would be an absolute monster to her, drive her away, and in turn his behavior would recoil on him and lead to his own bullying and ostracism. This would provide the impetus in his own life to re-evaluate himself, get on the straight and narrow, and then devote himself to Shoko in some manner. He would learn sign language, and bridge the gap between Shoko and the rest of the world. His awkward but earnest desire to make things better between them would eventually win Shoko over and they would fall in love.

That’s pretty much what happened up until the end of volume three. What happens after was a significant departure from what I was expecting, and not in a good way.  The first two volumes especially were just hit after emotional hit, as Shoyo and others mercilessly attacked Shoko, who is nothing but forgiving and meek and pathetic. It was painful to read, and that pain was never balanced out. There were times in the first few volumes where I had to take a break because of how emotionally pornographic it was. It was truly brutal in a way I have not encountered before- the dramatic equivalent of watching a gamboling puppy get repeatedly punted across a parking lot. After building up so much, the following volumes petered out hard. The rest of the story as they go through high-school is more or less cyclic: Shoyo tries something to make life better for Shoko, he screws it up and hurts her again, and he apologizes. Repeat a few times while bringing in or pushing out some secondary characters and we hurtle towards the end of the seventh volume where the ending is as unsatisfactory as the preceding three volumes. Shoyo’s sister gets a better finale than Shoko does and the whole affair seems unfinished. Now that’s not to say that a romantic finish was required, but the manga did end with two major threads left dangling. It very much feels like the author had either a change of heart, or got orders to wrap things up quickly given the abrupt change in tone. Things did end up better for Shoko and Shoyo, mostly revolving around the two establishing a circle of friends and the start of a proper adult life, but that portion of the story was about a dozen pages across an abbreviated time skip to the year they turned twenty.

If the entire romance sub-plot and the ending of volume three had been excised from the story, with the two main characters explicitly remaining in only a very platonic friendship, then I believe the overall story would have landed better. Yoshitoki does very well at showing how damaged Shoko is, as a person, which kinda-sorta justifies that romantic sub-plot, but a more straightforward treatment of it would have been preferable. I am still a bit sore that I suffered through the first three volumes with little payoff, and frankly, A Silent Voice is probably not worth reading. While it did win several awards, I get the feeling that it did so based on the bludgeoning it gave readers in the first part of the story, and not for the work as a whole.

1 thought on “Thoughts on A Silent Voice”