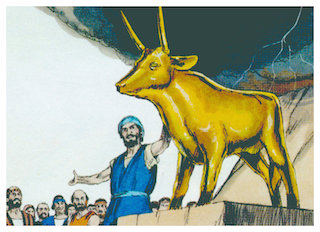 We all have our sacred cows. There are things in life that we think are so foundationally important that we can’t imagine a world without them. Sometimes these things are just cows, sometimes they are sacred, but we can make either cows or sacred things into sacred cows. I got a taste of that recently. This thing for me wasn’t just a cow, it is sacred, but It was one of my sacred cows.

I was 19(16 years ago), and It was a time of big upheaval in my life. But it was also, It was when I found religion. Specifically, I was baptized and confirmed in the Church of Jesus Christ of Latter-day Saints. I am a member of that same church this very day. Having found religion my life had been set on a good and true course that it would not have otherwise been on. I am a better man, husband, and father because of it.

When describing myself religiously I always say, “I’m faithful, not righteous.” I’m not saying I have exceptionally grievous sins, only that my faith in the Gospel comes easy but I have more trouble focusing on my building a relationship with the Savior and keeping the commandments and his teaching at the forefront of my mind. I am not a scriptorian by any means, I would much rather read the History of the German General Staff than Luke or the Meditations than Moroni (Book of Mormon book). However, my faith never wavered, that is it didn’t waiver until the massive government overreach that people call the Coronavirus Pandemic.

I can understand in the beginning, when there was a lot of chaos and things were largely unknown. I happened to be following media from the very beginning that saw through the whole sham, but not everyone was like me, so I am willing to give a little graced at the beginning. However, as time went on and on, I became more and more frustrated. Several of the people at the top echelons of my church are world renown doctors, including the President of the Church who is a world-famous heart surgeon. So, a year into 15 days to flatten the curve I was pretty angry and frustrated that my church was meekly accepting whatever the government said.

During this time, I moved to KY after getting out of the Navy and met someone who became good friends with me and shared some of my frustrations that were brought out by the response to the coronavirus. I found comfort in him and some others who shared my frustration and were able to express and talk about it. I still don’t think though, that at this time I recognized the Church itself was one of my sacred cows. I had always held firm faith in the church as a body was impervious to worldly corruption or error. I still thought that the church would always maintain the standard of truth and the Gospel of Jesus Christ of Nazareth. My though was that the church must be doing what God wants and is needful and as frustrating as it is, I must be the one who is overzealous in my desire to take the world head on.

A week ago I received an email from the Church. The content of this email that had me so irate was diversity and inclusion. Specifically, the email made reference to not just tolerating but actively including. The terms were vague and nebulous, as are all SJW slogans and phrases, but it was there. I began immediately chatting with my friend, who had been raised in the church. I talked to my wife, venting at what was literally rhetoric that pointed away from the truth coming from the church. It was after reflecting on these conversations that I came to realize:

The Church of Jesus Christ of Latter-day Saints has been one of my sacred cows.

My friend pointed out to me that over the years my church has become a billion-dollar corporation, with likely tens of thousands of people dependent on it for their livelihood. While most of the clergy are unpaid lay clergy. This is not true for a large portion of the centralized full-time positions in the church. The Church is also made up of people, who are all sinners, so of course error can be introduced and perpetuated. Now I have no idea who ultimately authorized that email or how much emphasis or thought was put into it, but that doesn’t change the fact that it is gravely wrong. That an error was allowed to go out and was not stopped.

This sacred cow I had made of something that is sacred has thoroughly been slain in my mind. Which is ultimately a good thing. But where does that leave me? I still firmly believe Jesus Christ of Nazareth is the Savior and Redeemer of mankind, died and rose again on the third day. I still believe the Book of Mormon is the Word of God and that Joseph Smith is a Prophet.

The real question, and the question for everyone who gets their sacred cows slain is: what are you going to do about it? The answer my friends, is keep moving forward and to fight for what you know is True. My friend is content to sit on the sidelines though he shares my view. He denied a church calling, I would not do that. When confronted with error in church and lessons I will speak up more boldly. I will take whatever calling they give me and be a standard for Truth wherever I am.

I know a lot of you have had similar experienced with churches, among other things, during these trying couple-of-years, but remember conflict is in the air we breathe, and it is the water in which we swim. Stand for the Truth, where you can. Keeping in mind prudence and good manners; now is our time to hold the line and say, “no more” whenever we are confronted with error and untruth.

Shields up, brothers. Hold the line and cover the man on your left, because the only way out now is through.