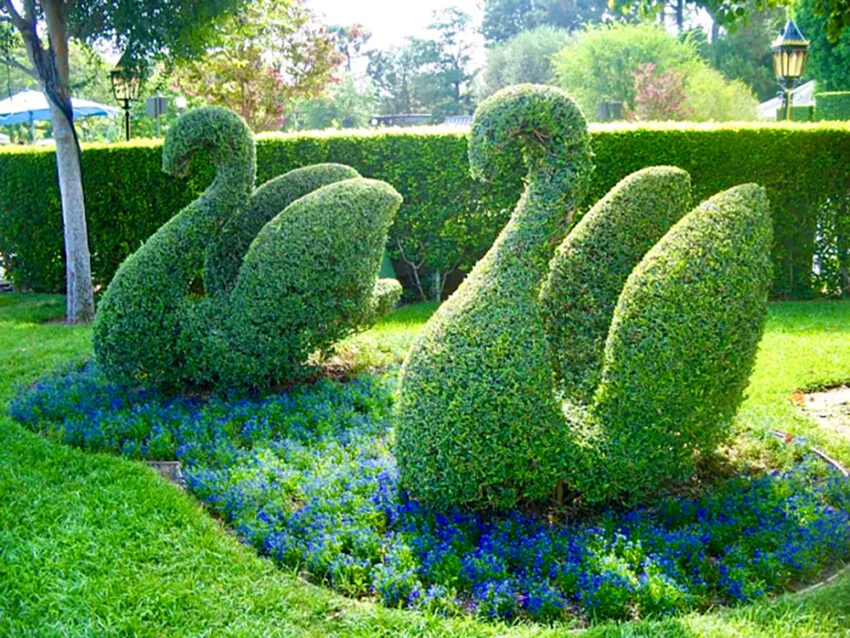 Some three decades ago, I did a service project with the Boy Scouts at Disney’s Give Kids the World, their resort for kids with terminal illnesses whose literal dying wish was to visit Disney World. We were there to help with unskilled maintenance, and I got assigned to trimming the shrubs. The landscaper overseeing us was a middle-aged white boomer who did landscaping for Disney World proper. Before we got started, he explained the correct way to trim bushes. He told us that instead of just cutting the bush into the shape you want with a hedge trimmer, you cut each branch that sticks beyond the shape at the first fork inside the bush. By doing that, you avoid the cut ends of sticks being exposed to view, you don’t have cut in half leaves everywhere, and it’s healthier for the plant. You end up with a shrub that looks like it naturally grew into a completely unnatural, geometric shape.

What struck me about this was the extreme level of detail and care that went into just making a square hedgerow. Disney wanted something fairytale perfect, down to the unconscious level. They wanted to shape the very plants, and they did it the hard way, so they didn’t look like they were shaped by human hands. Two decades ago, I worked a summer at the Magic Kingdom. During cast member orientation they told us that Disney did not do any maintenance while guests were in the parks. The parks were simply supposed to be. It was a glamour, and like most spells, knowing how the magic works dispelled it. So the guests weren’t allowed to see or know how the magic was maintained.

Again, this showed Disney’s commitment to a quality experience. You were stepping into a fairytale and fairytales don’t have electricians and landscapers and painters working in the story. So such pedestrian things didn’t exist at Disney.

I remember that all these years later because that depth of quality was rare even back then and it’s only gotten worse. That kind of craftsmanship and holistic vision, top to bottom, inside and out, still inspires me.

But it doesn’t even exist at Disney anymore. A few years ago, I took my family to the Magic Kingdom for the first time. Upon entering the central plaza, between Main Street USA and Cinderella’s Castle, we were greeted by a foreign dayworker, in dirty cargo pants and sweaty, neon orange safety shirt, hacking the shrubbery with a gas-powered hedge trimmer. Right there, half an hour after park opening, is someone pelting guests with noise, exhaust, and flying plant debris. Disney’s regard for quality is abandoned. The skin suit is still shuffling along, but the fairytale wonder of Disney is gone.