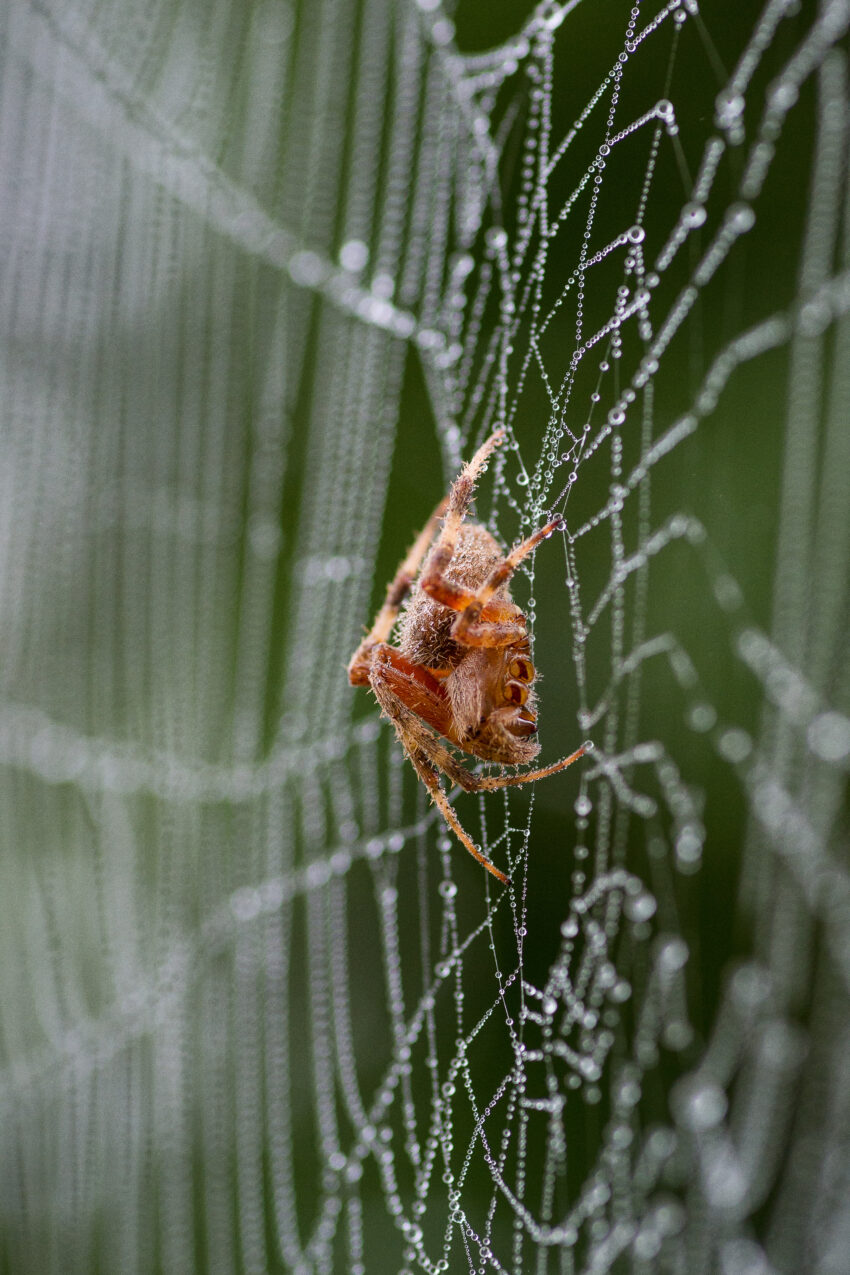 It is one of two times in a day when the night spiders (a.k.a. Hentz Orb-weaver spiders) come out from their shadowy hiding places and build their webs. The crepuscular hour. The sun has disappeared, but the sky glows blue like the nightlight in a child’s room.

The spiders work with a hurried – but not hasty – determination, undeterred from their task by either a strong southerly breeze or the prying eyes of curious bipeds. Their movements are programmed by hardwiring honed over the eons. Some of the webs can span two feet or more. Other webs, down low amongst the grasses, are humbler but are no less intricate and impressive. It is all relative to the size of the spider and the spider’s needs. The trees along the edge of the woods are thick with the larger variety. We can see their fat and speckled orange (Neoscona domicilorum) or brown (Neoscona crucifera) bodies floating under and in amongst the oak leaves. Some of them pause in their web-building efforts and hang for a time as if thinking of their next move, suspended from an unseen tether, bobbing like pendant earrings. Others tiptoe across skyscraper spans, high up in the treetops. Of these, we see only the silhouette of their plump forms against the fading light. We marvel at how it is they are able to throw that first sailing cast of silk far enough to reach a distant branch and then have the courage to step onto it.

The second crepuscular hour comes in the morning just before the sun breaks over the horizon. There is no web-building this time, but rather a dismantling. In this critical hour, immature spiders hastily remove their webs, preserving the precious material and gathering it to themselves like parachute silks. At the next twilight the spider weaves all over again. The adults, however, sometimes stay on their webs throughout the day. They are less vulnerable than the younger spiders, the favored prey of the mud dauber wasp. The mud dauber – which paralyzes the spider then walls it into its baby wasp incubator so that the infant has a meal – has learned to follow the spider’s unsticky support wires or “frame threads” straight to it, so it’s important that the orb-weaver removes all trace of itself. During the day the young spiders hide among leaves that they have sewn together with silk.

It’s not only the flying insects that must be aware of where they are going. If we are not careful, we run headlong into the webs, as the spiders’ preferred locales are all along our walking path, a wide swath between trees. It is the perfect space from both an engineering standpoint and a bug-snatching one. An unwary insect zooming along the same path will quickly find itself tangled in the sticky stuff with a ravenous spider speeding in its direction.

The N. crucifera and N. domicilorum females lay soft, yellow egg sacs that are home for about 1,000 wee spiders. The babies emerge in the spring. If you haven’t seen a spider egg “hatch,” well, it is quite a sight. Quite an unnerving sight if spiders are not your thing. It is a miracle that any of the tiny things survive. Several years ago, on a cool late fall morning, I walked, bleary-eyed from sleep into our kitchen and turned on the light. I reached for the knob of a corner cabinet that held our drinking glasses and felt my hand brush against something flexible yet strong, soft yet sticky, and a deep-seated, primeval dread crawled icily down my spine. Drawing back, I saw a large, hairy and bright orange Hentz Orb-weaver settled quite contentedly on the center of her web. We eyeballed each other for a moment. She clearly had no intention of moving, though she had thoughtlessly cut off access to a whole bank of cabinets. I graciously conceded the space and backed away slowly. How she came inside, I do not know, but we lived with each other – staying within our designated spaces – for several days. She would move her web slightly from one day to the next, but she seemed to prefer the corner. I confess to a feeling of loss on the morning she was no longer suspended between the cabinets.

That is the thing about Hentz Orb-weavers and other spiders. Their time is so fleeting. Here in Oklahoma the summer heat stretches into late September and early October, and the season seems reluctant to release her grasp. The signs of fall creep into the landscape: drifts of crisp leaves litter the driveway, shortening days, deep browns replacing the bright greens in the fields, and the slow and stealthy disappearance of the orb spiders. One by one they abandon their webs and climb into the protection of the trees for the last time. One day there is nothing suspended along our walking path but a sturdy, gossamer thread or two stretching from an oak leaf down to the ground to remind us of their existence.

I’ve documented the diverse flora and fauna – including spiders and other crawlies – on our Oklahoma ranch in my self-published books, The 160: The Essential Elements of an Oklahoma Ranch and Remains: Evidence of Life & Death on the Prairie.

Find more from Bluestem on her blog: Unrefined Vegan