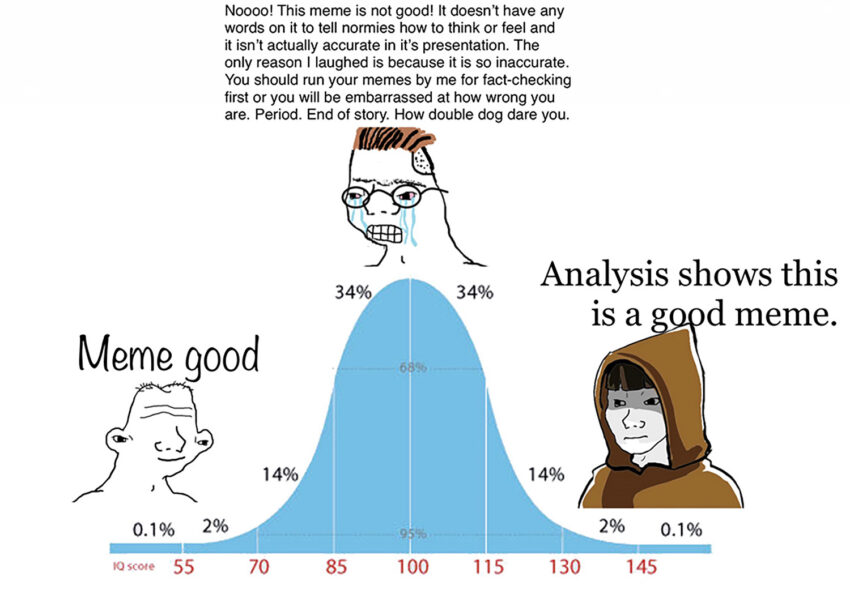 This week, Vox Day kicked off a successful and enjoyable meme review on Episode 936 of The Darkstream. I get the impression that Vox asked for memes and intended to rate the effectiveness of their rhetoric. People ended up sending a variety of memes, some of which were  specific to their tribes and/or were just meant to be funny.

If you did not instinctively clap twice, even mentally, this blog post series is probably not for you. If you prefer memes that are socially conscious and encourage people to “do better”, don’t waste your time. Your time is better spent mourning RBG and shopping for sustainable and environmentally friendly drinking straws.

I haven’t completely nailed down the metrics to judge what makes a meme good or lame. However, I can list and summarize the components of a good meme. I’m using Vox’s meme review as a jumping off point, so don’t take this as a review of his meme review.

A meme [clean speech warning on the link] is “an element of a culture or system of behavior that may be considered to be passed from one individual to another by nongenetic means, especially imitation.” I use “tribe” or “community” as shorthand for an online element of a culture.

A modern meme MUST (I’m sure some smrt boi will think of an exception):
Be an image or series of images with or without text
Have an element of truth
Elicit an emotional response
Be intended for an audience / have a target

The metrics of what makes a good or bad meme and what packs a rhetorical punch are much more extensive. One component that Vox overlooked this time around is nostalgia. The beautiful thing about a Nostalgic meme is that when it hits the right tribe it gives them a brief time away from politics, arguments, social unrest, war, sadness, and general stress. The break in the battle, even if it’s only a second or two is a morale boost. In these brief seconds, people are transported to a time that made them laugh, gave them joy, and was a simpler/easier time.

This meme made my husband and me laugh, but it didn’t work for Vox.

Reason- it is a Zoomer’s sense of humor crossed with a Gen X pop-nostalgia image, which narrows down the audience significantly.

This is the character Handi-Man (The Tiny Avenger is not pictured) from In Living Color. A very small group of people will “get” this meme, but Handi-Man meme author, carry on. You are handi-capable and plenty of us retards think you are funny.

Scott Adams, the creator of the wildly popular comic Dilbert, came up with a useful guide for writing good comedy.

The reason I bring this up is that Funny is a key element for making a good meme. Also, Scott’s metrics for Writing Funny can also be used to size-up memes and understand why they do or do not work for certain tribes.

One standard for memes that Vox Day talked about is Quality: the quality of the art, the clarity of the image, the appropriateness of the font choice, and readability of the font. I get the sense that he would not appreciate the Zoomer-humor Spoderman memes as much as I do.

The reason I consider Spoder a meme instead of just comics is that the memes spread rapidly (shared quickly) among certain tribes, and anyone can create and change them. Spoderman memes are a crude drawing of a wrecked Spiderman character.

The formulaic ending is Spoderman crying and asking “Y u do dis?” These memes are bizarre and silly and I love them.

In my defense, I love these memes because I want to give pop-Spiderman a wedgie and push him into a swimming pool. Also, he’s pretty when he cries.

Until next time, stay thirsty frens! 2 thoughts on “Meme Review and Meme Analysis – Part I”