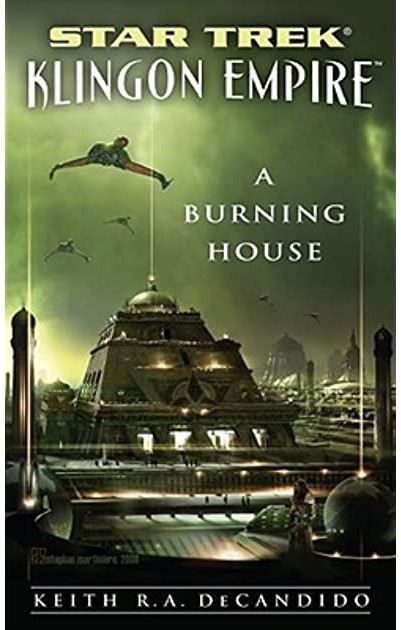 Last book I reviewed was Ship of the Line which had a substantial Klingon presence. This review covers A Burning House, and boy, it boasts an even higher Klingon presence. In fact, it’s predominantly Klingon. The characters are from a Klingon cruiser and spend almost all their time in Imperial space.

It took me a bit longer to get into the book than a usual Star Trek book. Of course, when I read one of those, I am familiar with the main characters already. Even if they are not Star Trek mains (such as Ship of the Line opening on the Bozeman), they are Federation vessels and crews. I was prepared for that difference. What I was not aware of at the start was that even though the book says it is part of the Klingon Empire subseries, it picks up where a prior trilogy left off. However, DeCandido does a good job of telling you everything you need to know from his IKS Gorkon series without once making it an infodump. He relays information you need to fill in the blanks smoothly. Along with sliding in the information, he provides a necessary glossary of Klingon terms in the back. A small difficulty comes from culture and not knowing if given names indicate a male or female Klingon.

The difficulty faced by a Star Trek: Klingon series is simple: the Klingons are defined by war and the quest for glory, any series would feel like the same three episodes over and over again.

Most of time with Klingons, we see or read about their warriors. Books have been important to building the culture between the original series and Next Generation. In fact, John M. Ford’s The Final Reflection presented them as the more than the stock villains of the original series. Ford first provided their concept of honor and glory-seeking.

DeCandido follows in Ford’s footsteps of focusing on the Empire. The title, A Burning House, refers to a Klingon proverb, “only a fool fights in a burning house.” Remembering the proverb, I imagined that the book would deal with a crisis or multiple issues threatening the Empire. This is correct. Being an empire with a strong martial heritage, intrigue and open threats play a substantial role in Klingon politics. Conflict reigns supreme. Now, all good books will have conflict, but it may be internal instead of external. With Klingons, all internal conflict has a decidely external face.

In one of the book’s multiple plotlines (almost too many), we spend time on a Klingon farm. Naturally, the defense force has to get their supplies from somewhere, but to spend time on the farm as they seek their own honor by providing a good harvest for the troops and having their own squabbles with the neighbors made the book unique.

Another plotline deals with Klingon opera and a writer’s urge to rewrite history for dramatic purposes. The Klingon soldier visiting his family in the slums was an eyewitness to the events and has to continually bite his tongue regarding the changes as well as issues with family and friends. For him, absence has made the heart grow fonder.

But when we think of a Klingon story, we immediately think of the ships and a quest for glory. We may also think of political intrigue and backstabbing. Those are in the book also. I believe that every Klingon named in an episode of Next Generation or Deep Space Nine is referred to. If you’ve ever wondered about Worf’s brother Kurn, he appears. The Klingon survivors from “Birth Right” make an appearance.

Some of this is too much to track with. A glossary of proper names would have helped immensely. The reappearances of those briefly mentioned was good to see, but added on top of all the plot threads with the Gorkon crew, it became difficult to keep track of.

The concept of honor runs deep and seeing it play out in the different strata of Klingon society made me smile. From the ground troops to the ship’s crew to the doctor to the political realm, all characters think of their honor, expanding it or restoring it. The concept plays important roles in all subplots, even the doctor in her quest to improve Klingon medicine.

As much as I liked the book, I was glad DeCandido tied up almost all the storylines. He left two or three open for the next book which never came. Others were closed but the characters could take two steps in the next book and begin another arc. I imagine that selling a series on the Klingon empire faced difficulties. A trilogy promises to tie up the loose ends by the close of book three. An open series does not. Many readers, even those who had gleefully bought IKS Gorkon, saw Klingon Empire was open ended and gave it a pass. I cannot fault them.

With the sudden drop into Klingon culture and so many plot threads, I was going to give the book 3 stars. However, a scene between Worf and Martok regarding the House of Mog near the end took it to 4. If you read the book, you’ll see immediately why.