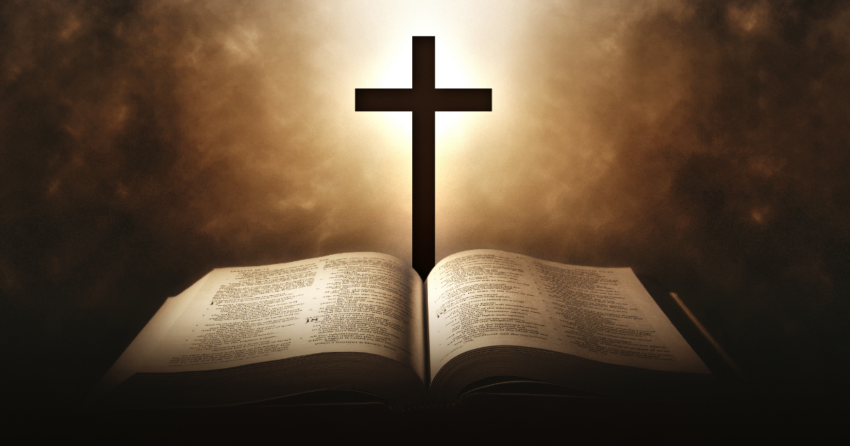 Because we are fallen, we must transform our minds to the way God wants it to be.

I heard about an old Assemblies of God pastor who went golfing with an unsaved councilman one day. On the way to the fifth hole, the councilman tripped. When he hit his head, he swore.

After an apology to the minister, they continued walking. The minister’s foot slid out form under him, and he landed hard on his back. “Praise God!” he said.

The councilman looked at him. “When I fell, I swore. When you fell, you said ‘praise God.’ Why?”

The minister replied, “Whatever you fill a bucket with comes out when the bucket is kicked. Your mind is the same way. Whatever you put it in comes out.”

What are you putting in your mind?

Sometimes people tell me that they have no religion. Maybe they call themselves a skeptic, agnostic, or an atheist. Whatever. They may have no religion, but they do have a worldview. We’ll get to what that is in a moment.

Some people, sometimes the same as those above, say that all religions are the same. I guess that’s true. They only differ on a few minor matters.

How should a Christian approach life? The answer is in Scripture. We will examine several passages of Scripture today when speaking on how a Christian should approach life. Romans 12:1,2; Exodus 20:7; Luke 20:19-26.

Romans 12:1,2 “Therefore, I urge you, brethren, by the mercies of God, to present your bodies a living and holy sacrifice, acceptable to God, which is your spiritual service of worship. And do not be conformed to this world, but be transformed by the renewing of your mind, so that you may prove what the will of God is, that which is good and acceptable and perfect.”

St. Paul wrote Romans to the church there. Christians had to be very careful in Rome at the time. Christianity was still considered a division of Judaism. This relationship between church and synagogue was rapidly deteriorating, but it still existed. Some of the Roman Christians were members of the imperial court and guard.

In the court, as in all administrations, intrigue and backstabbing ruled the day. In those dangerous situations, changing your attitude and actions would be a risk. However, that risk was commanded.

You see, living a Christian life is the least we can do for God. Our lives change because of what Christ did for us. Christian living is an act of worship to God.

The next verse speaks of being transformed. Transformed means a complete change. Like a butterfly coming out of a cocoon looks nothing like the caterpillar that went in. Salvation changes you. The Christian is no longer the same as the person prior to salvation. Everything changes. Or it should change.

Before we moved here to Iowa, I knew a southern Baptist minister who had come to the same conclusion I had about those who claim Christ but show no difference in their life. He and I had independently started describing them as “practical atheists.” Do you see the point of the term? Those who do not act as though they know God might as well not know Him. To claim Christ while acting unchristian is, in fact, blasphemous.

In this verse, Paul tells us not to come out of the same mold as everyone else. A Christian is to be different in all ways. The difference comes from the inside out. When you take upon yourself a Christian worldview, these differences will be obvious. How you act. How you respond.

A Christian worldview is also shown in the Old Testament in the third commandment. Exodus 20:7 “Do not take the name of the LORD, your God, in vain.” We often read that as simply a command not to swear, and that is certainly a small part of it. But if you examine the commandment, when you break it down in pieces, you see God relayed through Moses a much heavier command. Let’s work through it.

First, you see that what God says is stated in the strongest negative command possible in Hebrew. An absolute prohibition, it means ‘never.’ In fact, all the negative commandments are set up the same way. These are absolutely nots.

Secondly, you see the verb translated “take” doesn’t just mean to hold it in your hand but to put it on your shoulder like a yoke on an ox or carry a pack on your back. It means “burden yourself.”

Thirdly, “the name” means not only what they call themselves and what others call them, but also their reputation. We have that in English when we say, “You smear my good name, sir.” At the altar, we see it happen when a man and woman marry. She takes his last name to show she is joined to his family now and forever. At least that’s how it should be. We see it when a child is adopted and takes the last name of the new parents. The child is part of the family and that is proclaimed to all by the family name being the same throughout the family. Being part of a family indicates who you are. You read in the paper that so-and-so got arrested. No surprise, look at his last name.

Fourthly, “the LORD, your God.” Who is God? He is the creator, sustainer, and redeemer of the universe. He is the one who brought them out of Egypt, out of slavery. He had done many marvelous things for their family, and now He would do more.

The LORD refers to His personal name. Why do we call him LORD and not use the name? Because the Hebrew personal name of God is very special and not to be spoken lightly. The name means “He is, He was, and He will be” all rolled up together. That name He first made known to Abraham, Isaac, and Jacob, the three patriarchs of the Hebrews. It is the covenant name of God. Being made privy to the name is special. He signs the covenant with it. This is what He is putting on the line.

Finally, “in vain” doesn’t have anything to do with our thinking of vanity, but it means emptiness or falsehood. Flippantly, would also work when discussing this verse. You do this because you have weighed out the costs.

We put it back together this way: “Never flippantly burden yourself with the reputation of the one who makes this covenant with you.”

In other words, Moses told the people, “God has carved on this tablet a command: Never call yourself His unless you are going to act like it!”

I believe it was CS Lewis who said, “Character is who I am in the dark.” What do you do when no one is looking? HG Wells wrote a novel exploring this thought in The Invisible Man. The man who uses the invisibility serum doesn’t use it to help others. When no one can see him, he commits crimes. That shows his character. When he thought he wouldn’t get caught, he became a thief. There have been many other movies and books about people who become invisible and go criminal. I don’t know if it tells more about the writers themselves or how they see human nature that they assume a man who can’t be seen will do something wicked.

Of course, the religious person knows that he is never alone. God sees all. But we think we can reconcile with God easily. Say a quick prayer, and it is done. That might lead one to think they can sin with impunity and get quick forgiveness. Why? The transformed does not want to sin that way.

On several occasions, I have been asked, “what would you do differently if you knew God did not exist?” Do you see the unbeliever’s trap here? If I say I would do nothing different, then obviously I don’t need God to be good. If I say something–anything at all–then I admit that I serve God not out of love but out of fear.

Friends, neither side of this trap makes sense. First, I have never said one can’t be good without believing in God. What I say is that the worldview of an atheist will, by definition, differ from a Christian’s. And without believing in God one cannot believe in an objective morality. It is impossible to claim that any act, no matter how vile, might not be good under some situation. Because there is no standard that cuts across all time and cultures.

But we know that isn’t the case! We know there are acts that are always wrong! But, believe it or not, some will argue the fact. Theologian William Lane Craig was at a conference on ethics a few years ago. In one of the panels he attended, the statement was made that no act was always wrong. He decided to throw the panel a softball question. “Surely you would agree that child rape is always wrong?”

While the other panel members nodded in agreement with him, the one who made the original statement said, “I cannot say there would not be a culture and situation where that act was always wrong.”

The other panel members were aghast! They begged her to grant the exception. She refused.

When your worldview is naturalism–that there is no God and everything must come about by random chance–you have no magnetic north for your moral compass. In that case, staying alive often becomes the magnetic north. But it can’t be objective. What if your neighbor decides his life depends on you dying? Why is it wrong for him to act on that? Are you going to make exceptions now? Add on things that weren’t on the statement out of a sense of self-preservation?

With no moral law, there can be no objective good.

You can be a good person without believing in God. However, God’s existence is the only reason we can agree on what is good.

When God created us, He put his mark. Genesis 1 calls it the image of God. Genesis 2 refers to it as the breath of life whereby man became a living soul.

Jesus speaks of that image on a very specific occasion, our third passage. Seeking to trap him, some of his enemies asked him if it was right to pay taxes to Caesar. Let us read it together:

This was a trap. The Romans saw Jesus as just another Jewish preacher. The scribes and chief priests needed Rome to change their opinion on Jesus. So they set a trap. Jesus, wise as a serpent and gentle as a dove, slipped out of the trap. They asked, “Is it lawful to pay taxes to Caesar?

Jesus has them show a Roman coin. It has Caesar’s image on it.

When Jesus answered the question, He leaves another question dangling in the air. He can do this because they are all Hebrews here, and their minds have all been taught to look at the world through a Jewish worldview.

Had the questioner been honest, he would have asked a follow-up question. “What, then do I render to God?” It’s a question he didn’t ask because he already knew the answer. Using that word “image” or “likeness” as Jesus did would immediately bring to mind Genesis 1, “in the image of God, in his likeness.”

When you know this, how do you act on it? How has God’s touch transformed you? How do you act to show the change from God that is in your life?

What difference has Jesus made in your life and in your worldview?